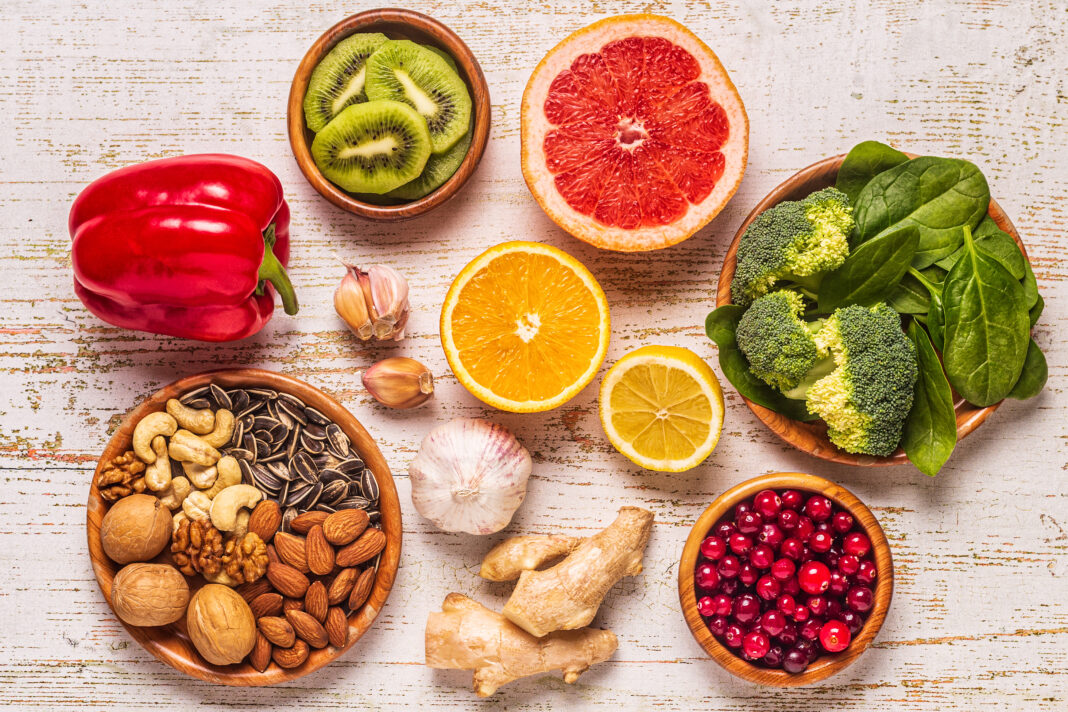 There are many ways to boost your immune system. One way is to take healthy foods into your body, and another is through exercise. These two methods work together to strengthen the immune system and make it more difficult for viruses or bacteria to invade the body. In this article, we will discuss some of the best foods that you can eat in order to keep your immune system strong!

Studies show garlic helps to fight infection by boosting white blood cells. Garlic also contains allicin which has been shown in lab studies to have antibiotic properties against MRSA (Methicillin resistant Staphylococcus Aureus). In one study, participants who took garlic each day for 12 months had fewer colds and flu than non-users. Another study found people with lung infections were less likely to develop complications when taking garlic supplements regularly. Fresh or powdered is good; use in cooking too!

Citrus fruits are a rich source of Vitamin C, which has been found to increase the production and activity of white blood cells. Studies have shown vitamin C may also help prevent colds by strengthening immunity before they start!

It is said that early Mediterranean cultures had no recorded cases of heart disease until they converted from their traditional diet to one based on processed foods. Fats such as olive oil can actually reduce inflammation in the body, thereby reducing risks for respiratory infections, obesity-related illnesses and other chronic conditions.

ginger is a spice that has been shown to have anti-inflammatory properties and, with its many health benefits, there are plenty of reasons why you should incorporate it into your cooking! One such benefit is ginger can help prevent migraines by lowering inflammation levels in the brain tissue and blood vessels around the head due to oxidative stress.

Turmeric contains curcumin which has been shown in studies to have anti-inflammatory and antioxidant properties, both of which help fight infection. In a study with mice who were given turmeric every day for five days before being exposed to the influenza virus, those receiving curcumin had significantly less weight loss than control groups.

Pineapples are another food that contain vitamin C and bromelian enzyme, making them great at fighting inflammation caused by colds. Bromelain also helps break down proteins such as gelatin into amino acids like glycine and proline. These two nutrients can be found abundantly in other plant foods too!

Apple cider vinegar is a type of acetic acid that can help reduce inflammation in the body. It also contains enzymes and probiotics which are all good for your gut! Studies have shown it helps to lower cholesterol levels as well by lowering triglyceride and LDL levels, resulting in improved cardiovascular health.

Almonds, especially raw almonds, are a great source of vitamin E which has been found to reduce inflammation in the body and help prevent viral infections. Studies have shown that eating one serving per day can be linked with lower risks for chronic respiratory diseases such as bronchitis or emphysema.

Green tea is another great source of antioxidants and can be found in many different formats. For example, a study with green tea extract has been shown to reduce inflammation by up to 20%! It also contains EGCG which helps break down proteins and protects the cells from oxidative damage – both helpful for keeping your immune system strong.

Broccoli may not seem like it would have much nutritional value but this food actually contains high amounts of vitamin C as well as sulforaphane, an anti-inflammatory agent that can fight bacteria and viruses such as MRSA or HRSV (human rhinovirus). Broccolini are especially rich in these nutrients so take advantage when they’re ready!

Blueberries are a great source of antioxidants, including vitamin C! They also provide protection against the negative effects of stress on your immune system. A study has shown that people who consumed blueberry powder were less likely to develop asthma or respiratory infections following stressful conditions than non-users.

While carrots may not seem like anything special they actually contain high amounts of beta carotene which help fight free radicals in our cells and reduce inflammation if you eat enough each day. Beta carotene is converted into Vitamin A by the liver so it can be beneficial for boosting immunity before any signs show up – especially during cold season!

Consuming fatty fish such as salmon regularly reduces risks for cardiovascular disease because their omega-three fatty acids help fight inflammation. These fats also have been linked to a reduced risk of developing certain cancers like breast cancer and colon cancer, as well as improving your mental health!

Your immune system is important for your body to fight off infection. It also helps protect you from diseases and illnesses that could potentially make you very sick or even kill you! You can help strengthen your immunity by eating the right foods, taking care of yourself through exercise and relaxation, not smoking cigarettes, avoiding alcohol if it doesn’t agree with you, getting enough sleep each night (7-9 hours), and protecting others around them who might be more vulnerable such as children.

Ketogenic Diet: Is It Good For You?

Most Important Vitamins For Your Health

10 Plants To Help You Sleep Better

ABOUT US
Healthlifeguru is a blog about health, diet, nutrition, and exercise. We cover everything from weight loss to finding your perfect workout routine. We focus on easy-to-follow tips, tricks, and recipes that can help you live your most healthy life possible. Our goal is to instill healthy habits for life - no matter what!
Contact us: [email protected]
FOLLOW US
© Copyright 2017 - Newspaper WordPress Theme by TagDiv
We use cookies on our website to give you the most relevant experience by remembering your preferences and repeat visits. By clicking “Accept” or continued use of site, you consent to the use of all cookies. Read More
Do not sell my personal information.
Cookie SettingsACCEPT and CLOSE
Manage consent

This website uses cookies to improve your experience while you navigate through the website. Out of these, the cookies that are categorized as necessary are stored on your browser as they are essential for the working of basic functionalities of the website. We also use third-party cookies that help us analyze and understand how you use this website. These cookies will be stored in your browser only with your consent. You also have the option to opt-out of these cookies. But opting out of some of these cookies may affect your browsing experience.
Necessary Always Enabled
Necessary cookies are absolutely essential for the website to function properly. These cookies ensure basic functionalities and security features of the website, anonymously.
Functional
Functional cookies help to perform certain functionalities like sharing the content of the website on social media platforms, collect feedbacks, and other third-party features.
Performance
Performance cookies are used to understand and analyze the key performance indexes of the website which helps in delivering a better user experience for the visitors.
Analytics
Analytical cookies are used to understand how visitors interact with the website. These cookies help provide information on metrics the number of visitors, bounce rate, traffic source, etc.
Advertisement
Advertisement cookies are used to provide visitors with relevant ads and marketing campaigns. These cookies track visitors across websites and collect information to provide customized ads.
Others
Other uncategorized cookies are those that are being analyzed and have not been classified into a category as yet.
SAVE & ACCEPT
%d bloggers like this: